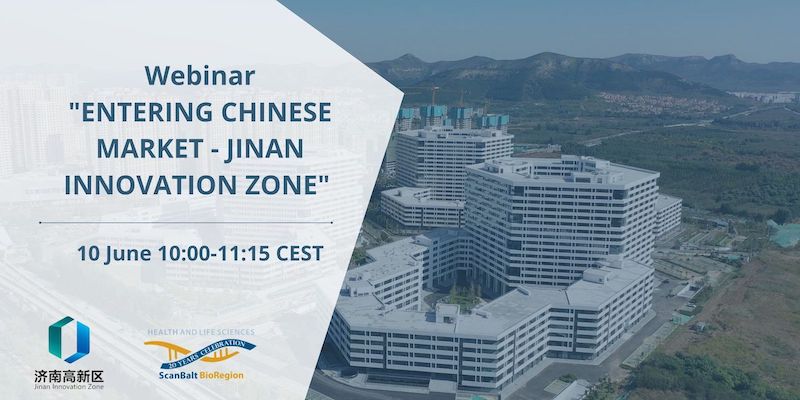 The webinar aims to give an overview of the services provided by the Jinan Innovation Zone and the practical aspects of expanding your company to the Chinese market. The challenge of China market entry has become an increasingly important one for Western companies of all shapes and size. Join us and learn more about entering the Chinese market and concrete possibilities to cooperate with many Chinese companies, located in Jinan Life Science City.

Sven is the Secretary General of the ScanBalt network which builds and supports the health tech ecosystem in the Baltic Sea Region. He also is the General Manager of the Tartu Biotechnology Park (TBP). His work in TBP supports local businesses and startups in health tech, biotechnology and other areas offering office and lab space, opportunities through project funding through EU and business development in an incubation program. Prior to that, Sven worked in the largest university of Estonia, Tartu University, as a Tech Transfer Officer and Head of the IP Unit commercializing the university’s intellectual property. In addition, Sven was a member of the board in the Connected Health Estonia cluster, which contained all major hospitals and universities in Estonia, and most Estonian health-tech SMEs and startups and where he helped to steer the cluster activities based on the needs of Estonian R&D institutions.

Jan has been working for Jinan government since 2017, after a career in a big European bank. His mission is to be the bridge for European companies and institutes to access the Chinese market. With his close contacts with his colleagues in Jinan government and also with local companies and investors, he helps European companies to find a Chinese partner, funding or support from local government with establishing their company or doing R&D activities in cooperation with universities and research institutes.

Sebastian has been working for the Investment Promotion Department of the Jinan Innovation Zone since 2017 and is permanently based in Jinan. He is managing the overseas contact offices in Germany, the Netherlands and Finland, having a bridge function between the JIZ, its companies and Europe. The main tasks are investment attraction as well as establishing cooperations and partnerships between JIZ companies and European companies and promoting the advantages of the JIZ to Europe.

*Jinan Innovation Zone (JIZ) is among the first batch of national-level hi-tech zones/economic development zones in China in 1991. The Zone consists of different industry parks – including the Jinan Life Science City, the Qilu Software Park, the Smart Equipment City, the Airport Economic Zone and the Innovation Valley with a focus on different industries – spread over a total area of 318km², and is now home to more than 50,000 companies. Jinan, the capital of Shandong province, is only 1.5 hours by train from Beijing and 3.5 hours from Shanghai and is one of the main logistic hubs in China. The JIZ together with its overseas offices provides support for foreign companies and investors to “soft land” in the Chinese market. Jinan is also known in China for its strong life science and healthcare industry, like biopharmaceuticals and medical devices.