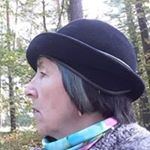 When ScanBalt was under establishment a number of persons played a pivotal role for a successful outcome. Mairita Coneva, then vice president of the Latvian Biotech Association, was one of these persons.

For several years thereafter she played an important role in representing the Latvian biotech scene in the ScanBalt network which led to participation in a number of projects.

Now Mairita dedicates her time to artwork having regular exhibitions in galleries. Her paintings can also be seen at schools, charity organisations, rehabilitation centers and nursing homes.

ScanBalt is extremely honored to have received 5 pieces of beautiful artwork as a gift from Mairita Coneva. The artwork will be exhibited in the ScanBalt secretariat but the intentions are to use them as rewards in e.g. the various competitions ScanBalt is involved in.

We wish Mairita Coneva all the best in her career as an artist – and encourage everybody to have a look at her artwork on Instagram by following the link below.