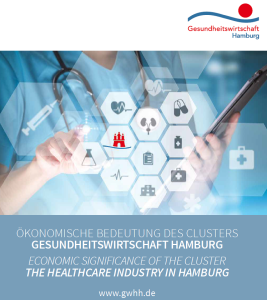 The positive economic effects of the healthcare industry are demonstrated in Hamburg.

In the Hanseatic port city, the sector has been growing for years, and forms an important part of the overall economic output.

This was first determined by the WifOR Economic Research Institute in 2015 in a study conducted on behalf of the Gesundheitswirtschaft Hamburg GmbH healthcare company, and has been updated by a new survey.

The healthcare industry is growing almost twice as quickly as Hamburg’s economy overall.

The gross value of the Hamburg healthcare industry for 2015 is 9.6 billion euros. Since 2006, it has grown almost twice as quickly as the entire Hamburg economy (2.2% p.a.).

This also means that it grew more quickly than the healthcare industry at a federal German level (3.8% p.a.).

Between 2006 and 2015, the healthcare industry in Hamburg expanded its share of the city’s overall economy by around 1.6 percentage points, making it one of the most important drivers of the economy there.

Read “The Healthcare Industry in Hamburg”

Previously both Hamburg and Schleswig-Holstein were analyzed in the report The Economic Footprint of Life Science Nord which concluded that in  the  regions  of  Hamburg  and  Schleswig-Holstein,  above-average  contributions  to  growth,  employment  and  exports are generated in the health industry compared to other areas of Germany.